skip to main | skip to sidebar

The following Case Briefs cite specific and concrete evidence on the judicial record showing how the wireless, electric, insurance and other industries are able to manipulate federal and State agencies and courts, community organizations, and even hate groups to retaliate against those who denounce the physical harm caused by radiation. The retaliation include concerned efforts to entrap and discredit the target, mobbing, harmful satellite tracking, road harassment, and even attempts to murder in a way that appears natural, accidental or self inflicted.

CASE BRIEFS
Jesus Mendoza, a parent of three children and other concerned parents submitted a request to make a risk evaluation of the levels of radiation found inside John Shary Elementary on the ground that high levels of radiation have been found inside the school and in close proximity to children. At first, School District Officials expressed a strong support for making a risk evaluation of the radiation found inside schools. Everything changed after they notified their insurance carrier.
On March 4, 2010, during a telephonic hearing, Mendoza presented to the Sharyland Independent School District evidence showing that our children are being exposed to levels of radiation more than twenty times the levels known to cause serious adverse health effects including physical and mental disabilities, leukemia including cancer. Evidence presented include a high number of children and teachers reporting illness. (1855 students and a high percentage of teachers have reported illness within a five month period. The student population is 700). The District’s Superintendent, Mr. Scott Owings claimed that flue was causing the high number of sickness, claimed that harm by radiation is imaginary adopting the statements of a scientist in the payroll of the wireless industry who has been accused of research fraud to conceal the real effects of exposure to radiation, and introduced as evidence excerpts of Case Briefs cited below to discredit the legitimacy of the Grievance. Hearing Officer Yasmine Nye attempted to exclude scientific studies showing the high risk taken by our children when exposed to radiation found inside schools, did not allow further measurements of radiation inside the school, did not allow testimony of expert witnesses, declined to notify parents of students with medical problems, and adopted the statements of Mr. Owings to deny the relief requested. (Evidence introduced in response to Mr. Owings claims include evidence showing that the radiation used inside the schools is the same type of radiation blamed for causing severe physical harm to police officers, firemen, electrical worker, and soldiers).
See copy of Flyer below

Jesus Mendoza’s electrical sensitivity was caused by malicious overexposure to radiation as retaliation for denouncing judicial corruption.
On May of 1995, Jesus Mendoza started to study law at the second largest law school in the country at The Thomas M. Cooley Law School in Lansing, Michigan. Mendoza made the Dean’s list and was elected President of the Hispanic Law Society for one term. During Mendoza’s second year of law school, Mendoza presented to the Dean of the law school, Don Leduc, a former attorney for the US Dept. of Justice concrete and specific evidence showing how the President of the law school and former Chief Justice of the Michigan Supreme Court Thomas E. Brennan and Michigan Court of Appeals Roman S. Briggs were using the school to defraud students of their federal loans while giving away law degrees to those affiliated with government agencies. Neither Judge Brennan, nor Judge Briggs denied or engaged the evidence of fraud. Instead, Mendoza was the subject of pervasive harassment, illegal searches, attempts of entrapment, and attempts to run over. On October of 1997, Mendoza was found with unexplained swollen heart at the emergency room. On July 13, of 1998 two individuals were trying to brake into Mendoza’s apartment around 3:00 am. The same day, Mendoza left the state and returned home, Mission, Texas. Mendoza left the law school in full compliance with the Honor Code and in good academic standing. See
Posted by Jesus Mendoza Maldonado at 4:02 PM 1 comment: 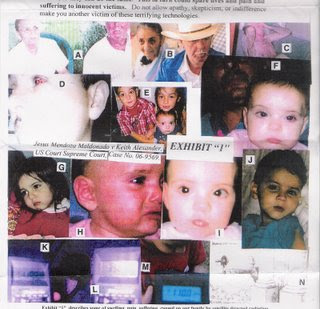 This case is the tip of the iceberg of a slow motion and virtual genocide in progress. (6-21-2007)At this time radiation directed from satellites are making homes, schools, offices, courts, churches, and even vehicles virtual microwave ovens. This case brings conclusive evidence showing how under the excuse of a domestic surveillance program, this Administration is using harmful technologies to commit crimes against humanity. This case brings conclusive evidence showing how this Administration has influenced federal courts to discredit as delusional, cases of electronic surveillance in order to conceal the fact that these technologies are in use for repression of those who denounce injustice. That is the main reason the President of the United States and the Governor of Texas should be compelled make a full disclosure of the radiation technologies used for electronic surveillance before Congress legalizes domestic spy surveillance programs.Exhibit "1", (attached), is conclusive evidence of an electronic aggression in progress, and shows some of the physical harm, swelling, pain, and suffering caused on my children my in-laws and on myself by radiation directed by satellite as retaliation for complaining of racial discrimination and fraud of federal funds against prominency. (Exhibit "1", Jesus Mendoza Maldonado v Keith Alexander et al, Supreme Court of the United States Case No. 06-9569. If the electronic torture continues undeterred against those who are actively denouncing the electronic aggressions, imagine the harm inflicted on unsuspecting victims.Please ask your federal and State legislators to make an investigation on this case, and to provide an explanation in writing to this case. Legislators have an obligation to tell you the truth. The question is whether congress can investigate when there is evidence of collusion on the federal courts to violate civil rights. Please share this information with others, so they can do the same. This in turn could spare lives and pain and suffering to innocent victims. Do not allow apathy, skepticism, or indifference make you another victim of these terrifying technologies.

WHAT IS SATELLITE SURVEILLANCE ?

At this time, government technicians, and surveillance contractors operating from secret locations are using satellite surveillance to observe and record even the most intimate activities of individuals. Satellite radiation surveillance technologies reserved otherwise for the military requires the bouncing of silent and invisible harmful radiation form the target's body to retrieve on a video screen, activity even inside walls or on a moving vehicle. Satellite surveillance uses global positioning radar, and technologies similar to the technology employed to remove kidney stones without surgery. Invisible laser beams are bounced from the target, and back to the satellites from different angles. However the concentration of radiation on a person, home or vehicle is harmful per se and can have deadly effects.This case demonstrates that these terrifying technologies are in use by hate to commit perfect crimes. This case demonstrates that there are no safeguards in place to impede that the same mentality that tortured, maimed, and murdered women and children in concentration camps, use this technology to harm people in homes, vehicles, schools, courts, hospitals, and even congregations.An electronic aggression can come from within the neighborhood, and there is nothing in place to prevent that neighbors use radiation as a weapon against each other. According to experts. simple modifications to existing technologies can make out of a microwave oven, or laser gun an electronic weapon that can be used to torture to death unsuspected victims. Local authorities are not equipped to detect this type of assault. However, the governor of Texas has declared his intention to legalize electronic surveillance programs similar to those employed by federal agencies, and does not deny the fact that radiation surveillance is already in use by Texas agencies.

HOW DO I KNOW IF I AM A VICTIM OF SATELLITE SURVEILLANCE?

An electronic aggression is very difficult to detect. Even after years of satellite targeting, a victim may not realize that her maladies are the result of an electronic assault. An electronic aggression is silent, invisible, and the physical harm can be attribute to natural causes. Even on the face of solid evidence showing that an electronic aggression is in progress, most people refuse to consider the possibility that this technology exists and that it is in use to torture to death unsuspected victims. On some cases, even dying victims are reluctant to believe that they are being tortured to death by satellites bouncing invisible radiation from their bodies. Those who have realized the electronic assault have been deemed delusional and have been unable to defend themselves.Exposure to directed radiation can cause pain, swelling of vital organs, and other maladies that can be blamed to weight gain, aging, or other natural causes. Even low intensity directed radiation can impair a specific vital organ, or weak the immune system to cause what may appear allergies or chronic flu symptoms or predispose internal bleeding, headaches, visual, memory, concentration, breathing and speech impairments, diarrhea, convulsions, seizures, irregular blood pressure and heart beat, heart attacks, cancer, birth and development defects, crib death syndrome, brain hemorrhage, autism, and nerve damage.Apart from gathering information, satellite surveillance is used to study the reactions of people when exposed to different intensities of directed radiation, to strategically exploit human strengths and weaknesses, in order to manipulate behavior and decision making, to disrupt relationships, to impair intellectual and physical abilities, and even to lead an unsuspected victim to acts of self-destruction. Directed radiation can strategically cause on the target or on bystanders, among other things, hyperactivity, sleep deprivation, fatigue, lethargy, apathy, mood swings, anxiety, irritability, and rage. These reactions can be used to strategically cause accidents, disrupt family, and business relationships, to inhibit worshiping in selected congregations, to disrupt sport competition, to inhibit voting in strategic areas. An electronic aggression can explain bizarre cases of family violence, road rage, unexpected aggressions by animals, unexplained deaths and suicides, death of immigrants by overexposure, strategic disruption of electronic equipment, cases of food and water poisoning, voter apathy in selected areas, and even health impairment of elected officials to gain legislative majorities.